The Role of the Stage in Consumption of Different Music Genres.

*In light of the cancellation of LSA 2020, this submission has been summarised for LSA members.

The purpose of this contribution is to problematise and extend discourse on the physical and symbolic presence of “the stage” and its capacity to affect the consumption of live performance through a focus on two distinct music genres/settings. In the world of rock and roll, we argue that the stage acts as a tool for audience mystification and deification of the performer(s), while contrastingly, MC subculture and its absence or perhaps, its re-interpretation of a traditional stage leads to a sense of communitas; a transcendent feeling where participants are freed from their normal social roles and statuses and instead engages them in a transcending camaraderie of status equality (Belk et al. 1989, 7), and belonging within the subculture.

The genesis of this idea came from attending a recent photography exhibition by Manchester photographer Richard Kelly. Framed as a retrospective, the work documented the photographer’s immersion in the live music scene between 1999-2019, with the subsequent collection featuring intimate portraits of seminal artists of indie culture; some of whom were Amy Winehouse, Pete Doherty, Tame Impala, The Prodigy, Florence Welch, amongst others, and The Arctic Monkeys, for whom Kelly worked as the official tour photographer for the band’s first three albums.

A self-confessed ‘outsider’ of the scene (Manchester’s Finest 2019), his disinterest in the cultural furore associated with the field serendipitously endeared him to artists, which in turn resulted in working relationships, greater access to the field and more intimate portraits of ‘rock stars’ lives.

His experiences catalyse this debate, and serve as a refreshing contradiction to the notion continuously espoused in cultural industries, that “cultural work is special and mysterious and can only be undertaken by special and mysterious people” (Beck 2003, 3). The stage, we argue, is a fundamental physical and figurative presence in the orchestration of this mystery and specialness.

Considering extant consumer research literature, we have come to understand consumption as an existential undertaking performed in the wake of a lack of spiritual fulfilment (Lonergan et al. 2019; Elliott 1997). The subsequent alienation felt from increasing industrialisation and globalisation has resulted in the erosion of traditional communities and for many, an increasingly fragmented sense of self. Seeking to quell an inherent sense of longing through social recognition (Cushman 1990; Crossley 2001), consumers search various cultural resources for meaning with which to negotiate their ongoing project of identity, make sense of everyday life, and forge a sense of belonging and stability in a turbulent consumer society (Elliott 1997). The arts, and particularly music, is one of these primary cultural resources that has for centuries been a conduit for identity expression and the communication of peoples’ values, beliefs, social connections etc.

The inevitable commodification of music has led to its synonymity with that of “the good life”; a shift in social values from spiritual rewards to material and hedonistic pleasures. Bolstered by a capitalist system, these perceived idealised lifestyles leave individuals in a state of imaginative longing for the trappings and rewards of the good life as embodied by those that seemingly live in this world (Campbell 1987). Desirous and enchanted individuals’ minds subsequently project an aura of deification and sacredness upon those that they perceive as belonging to this world.

As Berger (1972, 148) argues, the projection of aura “cannot exist without personal social envy being a common and widespread emotion.” Considering the rock gig as a ceremony for deification, we argue that aside from its utilitarian purpose, the stage performs another important function. It exists to inspire dreams, hailing the audience to imagine themselves existing as, or in relation to the ideal subject(s). The stage is thus an instrument to stoke envy through physical separation, but also in doing so, figuratively manifests a separation between imagination and reality, between artist and the public. In the wake of a perceived lifestyle gap, audiences’ dreams, fantasies and longings for meaning are projected onto the performer(s) and their lifestyles.

Contrastingly, MC culture as experienced by Kelly is a world away from the deification and decadence of rock and roll. It is one in which field-specific practices are guided by a more democratic and communal ideology where recording, production and live performance are concerned. The conscious lack of a stage (in the traditional sense) forces MCs and audiences to unconsciously reinterpret the relationship between performer and audience, the result of which as observed by Kelly, engenders an enduring sense of communitas and subsequent belonging. 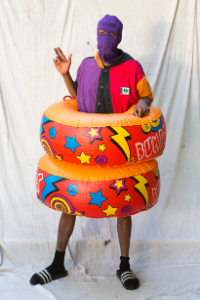 In a similar way as rave culture during the late 90s, the sub-cultural space is not one that orchestrates worship but more acts as a site of belonging, creativity and expression. Performances are a more symbiotic process of co-creation, fuelled and held together by participants’ and performers’ shared commonalities and lived experiences of economic inequality, marginalisation, disillusionment and everyday struggle. The ideological purpose of the stage in this space is not to present figures to deify, but instead, authoritative and inspiring voices, whose embodied performance mobilises affective energies to connect bodies in relation and enlivens an enduring spirit of communitas.

Both authors are interested in researching and documenting this area, particularly given the genre’s catapult into mainstream culture and its inevitable commodification. The result of which has led (some argue) to the (mis)appropriation and misrepresentation of the genre (BBC 2020). To return to the stage analogy, it seems as though it is both physically and figuratively becoming increasingly elevated, and while artists are beginning to receive their deserved plaudits, does the inevitable encroachment of commercialisation brought by the stage threaten to disregard the ideological purpose on which the genre was founded?

Campbell, C. (1987) The Romantic Ethic and the Spirit of Modern Consumerism, Oxford: Blackwell.

‘Home brewing as serious leisure: A sociolinguistic perspective’ This study contributes to a working… Read More

Of Companionship, Curfews, and Conflict: Multispecies Leisure and Struggles for Justice in the Age of… Read More